Let’s look at some more cute Christmas ornament ideas that involve buttons. These ornaments are slightly more work than last week’s ideas, but they’re still not overly complicated. So here are two more possible projects for you to tackle: 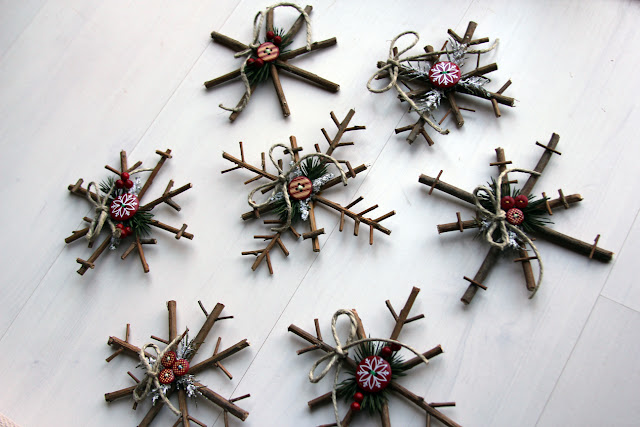 The first (and slightly more complex) project comes from Little Things Bring Smiles. She has a well done, full tutorial with lots of photos to walk you through this one. Basic supplies include twigs, pruning shears, felt, & hot glue gun. You can then make it as simple or as complicated as you want by adding bits of pine bough, buttons, twine, berries, and glitter. It looks like a bit of finicky work to glue the small twigs onto the main stems to form the snowflakes, but maybe it’s not too difficult. I’ll give this project a try one year, but it probably won’t get done this year… onto my pile of Christmas Pinterest ideas it goes… 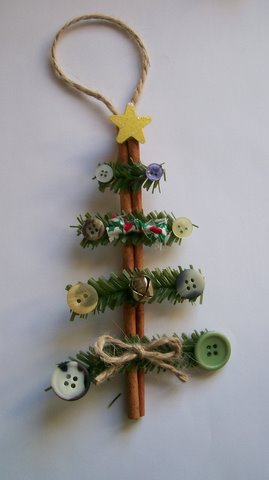 The second project comes from S.C.R.A.P., the cinnamon stick Christmas tree. All you need for this ornament are: cinnamon sticks, wire cutters, scissors, bits of artificial pine, hot glue gun, buttons, and twine. I actually made several of these the other night. They go together fairly quickly, but they do create a bit of mess because I had to trim my bits of artificial pine down, so that they wouldn’t be quite so bushy (if that makes sense). The “pine needles” on my garland were quite long, so I trimmed them all down. In the end, I could only fit three “branches” across my cinnamon stick. I glued on buttons, including some little star shaped buttons that I had on hand, and I did add the little twine bows to some of them because they were so cute. We will likely hang these ornaments on gift bags for our friends & family this year. Which means, I should really get busy and make some more of them!

Hope you are all getting some time to enjoy whatever activities make Christmas special for you, whether that’s baking cookies, writing Christmas cards, decorating your home, making crafts for yourself or gifts for your friends, or helping out in your community! Enjoy this season of hope, love, and generosity!